Very strange fault on this board – two misplaced tiles on the title screen – but absolutely no fault anywhere else. 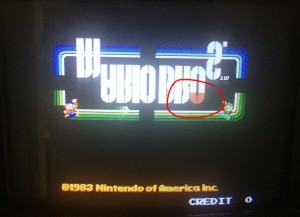 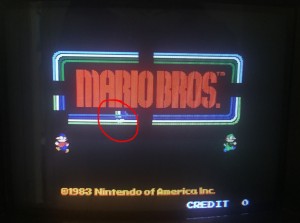 That kind of fault is very strange as usually a fault with video hardware like this would affect all sprites, or at least groups of related sprites.  Indeed when the CPU board was matched with a known working video board the fault remained – so it was on the CPU board rather than in graphics generation.  As the program EPROMs verified correct the main suspect would be the Z80-DMA chip which copies data from memory to the video board – however I found the fault with some luck by swapping the two main CPU RAM chips.  The fault went away with different RAM, and came back with the original RAM replaced. 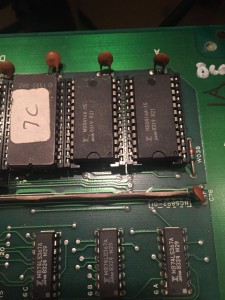 New RAM installed to properly fix the problem but still a very strange fault – usually when RAM fails an entire an address row or the data bus is taken out – which usually means the CPU program will fail quickly.  This RAM must just have a handful of bad bits that happened to correspond to work area for the title screen.