Game didn’t boot and immediately shut down the power supply.  Indeed, a meter confirmed only 2 or 3 ohms of resistance between GND and +5V at the edge connector, so something was shorted on the board.  There’s really no easy way to find a short on a board like this.  Removing all the socketed chips to eliminate them is a good first step as well as looking for physical damage, especially to capacitors that may bridge GND and +5V.

Luckily I found the fault fairly quickly – when I lifted one of the legs of the ZD1 component the short was gone and the board played correctly.  I believe the design of the board is ZD1 provides some overvoltage protection by bleeding the +5V line to GND if required, however in this case it had simply failed and shorted +5V to GND. 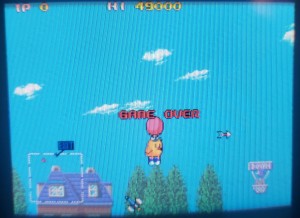 Game ran but sprites were garbage – bad positions and lots of corruption.

I ran the self test before doing much more – and it came back with bad custom IC30.  This is actually a math coprocessor, and the main CPU uses it for maths to position all the sprites in screen space – so if it fails sprites will be corrupt.

Luckily I had a spare for this chip from a Thunderblade parts board.  Game was perfect after I swapped it in. 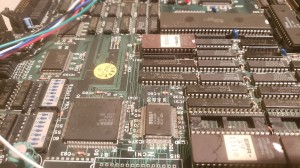 Game didn’t boot – and physical damage was the obvious problem – the PST518A reset controller was missing from the board.  A replacement was taken from a scrap board and the game ran again. 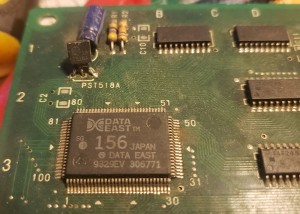 No sound – again some obvious physical damage – the power amp had been ripped from the board.  A brand new MB3730A was bought on Ebay and installed and the game was perfect again.

Board showed missing graphics on the title screen and blocks in game were often wrong.

After some diagnosis it became clear the scroll position on the tilemap was wrong – rather than actually anything wrong with the tilemap itself.  The missing title screen graphics were instead horizontally scrolled off screen by 256 pixels.

The scroll position is controlled by the 137419-104 custom chip and this seems to have failed with the 256H line stuck high.  Fortunately this chip is also on a few other Atari games, including Pit Fighter, so I pulled a chip from a corroded parts board to fix the Gauntlet.

The board had another fault I recognised immediately from another repair – sprites with ‘sparkly’ vertical lines down the screen.  This is a failure of the resistor packs used to pull the sprite data lines high when erasing a scanline.  These packs are at the corner of the board, so any flexing of the board can lead to hairline fractures.  470ohm resistors can be used as a replacement. 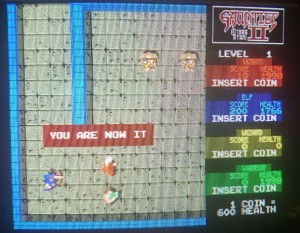 I’ve still been repairing but have had little time over the past year to write up any posts.  I’ll still try to document the more interesting ones though.